Home » Recipes » Bread In 20 Minutes, Or the Fast, The Delicious and The Gluten Free
Pin It

Bread In 20 Minutes, Or the Fast, The Delicious and The Gluten Free Recipe 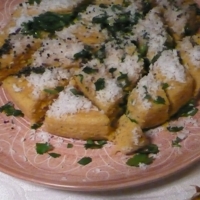 Every culture and cuisine has their own version of bread and I like all of them. Flat or tall, round, square oblong, leavened, or un, paper-thin or giant heavy slabs. I love the stuff.
What I don't love is the mixing, kneading, waiting, rising, punching, and pinching that's usually involved in a lot of the bread making process.
When I was fixing my buffet for Oscar night I really wanted to be able to watch everyone come down the red carpet, I didn't want to be in the kitchen wielding a tava, turning out hot chapattis like a crazed robot. I know I could have made them ahead and kept them warm but I'm a stickler and for me it's all about the fresh and puffy.
It doesn't get any fresher or puffier than the light and delicious Gujarati treat, known as Dhokla . The first time I ever made this amazing steamed bread, about 20 years ago, I was in hog heaven. I gorged on it, then moved on to mastering other treats. Last year I started making it again. I'm not neglecting this recipe any more.
I made it for my Bollywood Hollywood Oscar Feast and by the time I made my way over to the buffet for my share of the goodies, the plate had been pillaged. Yes, it's that good. The recipe I used is adapted from a simple traditional recipe featured in Lord Krishnas' Cuisine by Yamuna Devi.
The recipe requires a bit of time, but it's lazy time in that once the batter is mixed, it's set aside for at least 8 hours or overnight. Go do your thing, let that batter rest wrapped up warm in a safe place. The bread is made and steamed the next day in about 15 minutes. So easy, and since it's made with besan or gram flour made from ground up chickpeas, it's high in protein and gluten free!
This bread is wonderful hot out of the steamer, and also great at room temperature. This amount of bread added up to about 24 pieces. There were 10 of us and within an hour there was none left.
This bread is also gluten free (though not sugar free) for those who follow a gluten free diet. It's so good you won't miss the gluten at all.

A Tuscan Dessert, Light As Spring

A Rose Garden Of A Dessert!

When Only The Most Decadent Will Do. Aztec Chocolate Ice Cream. But Don't Stop There...

Is the SLA as popular as other methods in rapid prototyping service?