Home » Recipes » A Rose Garden Of A Dessert!
Pin It

A Rose Garden Of A Dessert! Recipe 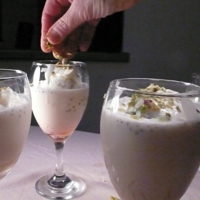 This weekend we had company. This is nothing new for us, weekends are always for entertaining. This guest was different however, at least for me. My husbands' old boarding school pal was in the Bay Area. So on Sunday she and her sister drove over for a big Indian lunch at our house.
I've become Facebook friends with quite a few of my husbands' old running buddies from Connecticut and various New England boarding schools. One of my best Facebook friends is one of his old roommates when they were 14. Even though I feel like I have met many of these people, I haven't. Until Sunday.
It's very weird to meet someone one already knows. Weird and yet cool also. I had someone from my virtual world in my actual house. Sort of like Avatar..but not. Since Jemima reads this blog, I promised to cook an Indian lunch for her and her sister Sarah.
Cooking the actual meal began the day before. Almost all the dishes were slow cooked in clay. That menu will be for a later post, what I want to talk about today is the dessert!
I've gotten in the habit lately of experimenting with desserts. When I cook a large Indian meal, I always like to try and do something interesting at the end. Large, heavy western-style slabs of cake or pie don't go, so I like to do some research, read and then see what I can make with what I have on hand.
On my last trip to our local Indian market I'd picked up a packet of seviyan or falooda noodles. The first time I'd had these noodles was at an Iranian ice cream parlor in Los Angeles called Mashti Malones. The threadlike little noodles were mixed into a rosewater ice cream and were amazingly delicious and addictive. I was hooked.
Originally I thought I'd just blend some of the falooda noodles into a rosewater pistachio ice cream I was making and be done with it. But then I got Falooda Madness! I spent the next two days reading all about Falooda, Faloodah, Faluda, and Faludah online. There are almost as many variations on what one can do with this as there are spellings of it.
Falooda was originally developed in Persia/Iran and then traveled to India and Pakistan via the Mughals. Desserts involving these skinny little vermicelli are found all over Southeast Asia. I decided they needed to be found in Sonoma too. It was going to be a Falooda kind of weekend.
Falooda is sort of like an Ice Cream Sundae . An ice cream sundae designed by a Paris parfumerie. Traditionally the sort of Falooda I set out to make contains Kulfi and not western-style ice cream as we know it. I've made Kulfi, but this time I used home made rose flower pistachio ice cream which worked just fine.
The first thing one needs for a tasty Falooda is Rose Syrup

Other flavored syrups can be used, but traditionally rose is the one most associated with this dessert. Rose syrups can be bought but it's cheaper and pretty quick and easy to make your own.
Next the noodles.
I bought a package of thin Falooda noodles at the Indian market. Other substitutes are a very fine vermicelli. All that is needed is a handful.
Basil seeds are found in many drinks and desserts. They're a refreshing and healthful additive.
They're also fun because they resemble tiny little tadpoles in whatever ones' serving them in. Hey, to me that's fun. They're found in most Asian markets.

"When soaked in water the seeds of several basil varieties become gelatinous, and are used in Asian drinks and desserts such as falooda or Sherbet. Such seeds are known variously as sabza, subza, takmaria, tukmaria, tukhamaria, falooda, selasih (Malay/Indonesian) or hột é (Vietnamese). They are used for their medicinal properties in Ayurveda, the traditional medicinal system of India and Siddha medicine, a traditional Tamil system of medicine. They are also used as popular drinks in Southeast Asia."

So there!
Ice Creamof course is the centerpiece of the dish and then to finish I mixed up a bit of saffron sirkhand and used that as a topping, then sprinkled chopped raw pistachio nuts on top . I have seen whipped cream and a cherry used but somehow, it seemed wrong for what I was looking for.
A long silver spoon and a straw and Voila! You are in the Falooda business!
This may seem complicated or a lot of steps , but it's not. The rose syrup makes up easily and can be prepared well ahead of time. It keeps in the fridge and can be used in many other Indian desserts. The noodles cook fast and also keep chilled. The basil seeds may be the only tricky thing to find but the ever popular chia seed might be an easy substitute.
If you've never had this dessert you are in for a great treat. It's more than just a sweet at the close of a meal, it's a walk through a perfumed garden of sweetened delights. The combo of tastes, color and textures makes this a one of a kind grand finale!

Anyone Can Pickle! Cherries, Sweet, Spicy and Fast!

Get Your Party On With Baked Crab Samosas

A Showstopper Dessert Made Easy!

Garden In A Fish

The Banana Split...Deconstructed. A Light Variation On A Classic!