Home » Recipes » In the Raw…Ceviche!
Pin It 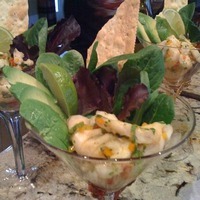 Ceviche (also spelled as cebiche or seviche) is a citrus-marinated seafood, its birthplace is disputed between Peru and Ecuador.[1] Although it is a typical dish of both countries, many other countries in Latin America have adopted it, with variations. Both fish and shellfish can be used in the preparation of ceviche.

In Peru, it is composed of chunks of raw fish, marinated in lime or lemon juice though sometimes bitter orange (naranja agria), sliced onion, chili, salt and pepper. Regional or contemporary variations include garlic, minced Peruvian ají limo, or the popular Andean chilli rocoto a. The mixture was traditionally marinated for several hours and served at room temperature with chunks of corn-on-the-cob,and slices of cooked sweet potato. Corvina or Cebo (sea bass) is the traditional fish, from its use comes the dish name. Regional variations include toasted corn or “cancha” and yuyo (seaweed). A specialty of the northern coast, (Trujillo) is ceviche prepared from shark (tollo or tojo). Lenguado (sole) has always been favoured whithin Lima’s gourmands. The modern version of Peruvian ceviche -the one all consider now the “peruvian way”- and closer to Japanese sashimi (marinated only a few minutes and prepared just before serving) was a creation of recently deceased Peruvian-Japanese chef Dario Matsufuji, during the 70s. Many Peruvian cevicherías serve a small glass of leche de tigre or leche de pantera as an appetizer, which is a small quantity of the lime juice marinade. In its classical version, ceviche is a very simple dish: fresh sliced fish (white meat fish is better), freshly squeezed Peruvian key lime juice ; a type of lime that can only be found in Perú which gives it a very distinct flavor that makes Peruvian ceviche like no other in the world (literally) , sliced onions, salt and chili (ají, limo, or rocoto).

In Panama, ceviche is prepared with lemon juice, chopped onion, celery, habanero pepper, and sea salt. Ceviche de corvina (white sea bass) is very popular and served as an appetizer in most local restaurants. It is also commonly prepared with octopus, shrimp, and squid.

In the Philippines, Kinilaw or Kilawin is raw fish cubed and marinated in vinegar or Calamansi juice along with garlic, onions, ginger, tomato and various peppers.

In Ecuador, shrimp ceviche tends to be made with tomato sauce for a tangy taste. The Manabí style, made with lime juice, salt and the juice provided by the shrimp itself is very popular. Occasionally one can find ceviche made with clam. It is served in a bowl with toasted corn kernels as a side dish (plantains and pop corn are also typical ceviche side dishes). Sea bass, octopus and crab ceviches are also common in Ecuador.

Justin Thyme
recommends serving this with: