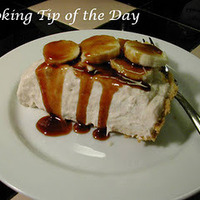 by Linda Percell
Publisher of: cookingtipoftheday.blogspot.com

I was experimenting again with my no-bake cream cheese pie recipe and decided to try making a Bananas Foster version…. it turned out delicious!... I mean how can you possibly go wrong when you top a banana cream cheese pie with bananas smothered in sauce made with butter, brown sugar, vanilla, rum and a touch of cinnamon… the answer is.. you can’t go wrong.

Instead of topping the pie itself… I topped each slice… it made it easier to serve and the presentation prettier.

You can substitute rum extract instead of the rum in the recipe… use 1 ½ teaspoon rum extract.

I hope you enjoy this wonderful pie!

All you need to do:

In a large bowl, whip the heavy cream until stiff peaks form. Set aside.

Using the paddle attachment of the mixer, beat the softened cream cheese in a mixing bowl until creamy.

Add the sugar and vanilla, and beat until well mixed, scraping the bowl and paddle periodically.

Add the sour cream and the pureed banana. Beat on low speed until well mixed.

Remove the paddle attachment and add the whipped cream, folding it until well incorporated.

Scoop the cream cheese mixture out of the bowl and into the pie shell.

Before serving make the topping:

In a small saucepan, melt the butter.

Add the brown sugar, vanilla, rum and cinnamon. Cook over low heat until the sugar has melted.

Remove from the heat and cool slighty.

Slice the bananas and place some on top of each slice… drizzle sauce over bananas and serve.