How to dress a salad in the Italian manner Recipe 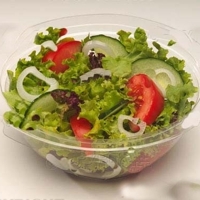 Making salad in the Italian manner, which can be nicely summed up by the following proverb:

Which, loosely translated, means: "to properly dress a salad, you need a miser to add the vinegar, a judge to add the salt and a spendthrift to add the oil." In other words, there are only three ingredients for dressing the salad and the proportions are as indicated--very little vinegar, the 'right' amount of salt (not too much, not too little) and a generous amount of oil. The taste of the oil, in fact, should dominate, not--as is usually the case for oil-and-vinegar dressings in the States but also (albeit to a lesser extent) in a French vinaigrette--the vinegar. Of course, this means that a fruity extra-virgin olive oil is essential.

The other thing that sets the Italian approach apart is that the dressing does not exist separately from the salad itself. You don't make the dressing in a bowl (as for a vinaigrette) you add the three ingredients, seriatum, to the greens, tossing after each addition. I usually start with the oil, then the vinegar and then finally the salt. Then taste and adjust for balance. (I'm not sure, however, if there are any hard and fast rules about the order.)

Once dressed, serve the salad immediately, as it will begin to wilt almost immediately--unless, of course, you are using iceberg lettuce, but the less said on that subject, the better. The most popular mix for salads in Italy is called (in Rome at least) misticanza. It's quite similar to the mixed baby greens you can buy here in States. Salads of arugula only (called rughetta in Rome, rucola in standard Italian) are also quite popular, and often serve as a bed for sliced steak (tagliata di manzo) as featured in my Italian cookout post.--it's a fabulous combination.

How To Bake A Cake (With The Help Of A Toddler)

How to Find a Drug Rehab Program