Home » Recipes » Here's Where I Go Bananas!
Pin It

Here's Where I Go Bananas! Recipe 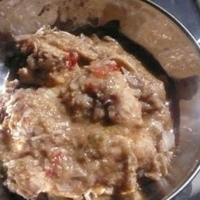 
Have you ever gone shopping and found yourself buying something, bringing it home sticking it in the closet and just keeping it there? Have you ever had one of those "what was I thinking?!" moments, where you wondered what the hell you were thinking when you bought something in "tangerine"???
Well, yes I've been guilty of all those crimes. To be practical one can always buy a sweater, get it home and then stick it in the back of the closet. Sooner or later you WILL wear that sweater, if not from boredom or necessity than from guilt.
I also have a bad habit of doing this with food..mainly vegetables and fruit. Now with vegetables and fruit you can't just put it away and wait for next season..because next season there will be new fruit, and in the meantime the old fruit will "go bad" and not a cute tough guy with a heart of gold kind of bad, but an oozy, sloppy, sticky goo kind of bad "from which bourn there is no return"..to totally muck up Shakespeare,and your fridge.
So, ok. I've got Goat in my fridge and a couple of ducks that I'm worried about, but the worst trouble I get into is with the more exotic members of the vegetable family.
Then there's that Banana Flower.
Ever since I brought it home full of bravado and high spirits last Sunday, it's been sitting in my fridge like a large, armored shell. A pretty pink and purple armored shell. Since I mentioned on this blog and to everyone I know that "Hey, I've got a banana flower and you don't!" I had to cook the damn thing. I'm not saying that I was afraid to cook it. I've cooked, plucked and gutted in my time if it didn't turn out so what..I could just chuck it. But, there was one other consideration and that is the other person in this house. My husband.
My husband has traveled the world. It's because of him and his family that I even started cooking Indian food in the first place. He's a very curious and daring eater, but I was worried if he'd be willing to go bananas with me. He was, on one condition. That there be no prawns. Having just seen District 9 and loving it, he wasn't exactly ready to face something that contained prawns. I explained that my prawns
would bear no resemblance to
those prawns,
It was no go.
So I figured, let's go chicken. Chicken and banana flowers. Can't go wrong with that.
Well, I didn't, and it was easier and tastier than I thought.
First, cleaning the banana flower. There were all sorts of dire warnings. Beware sap, wear gloves. Again with the gloves! It was actually a lot easier than I'd read and there were no gloves involved. I got everything I needed to know by going onto the Internet Tubes and Googling Cleaning Banana Flower. There were a bunch of videos and websites. In fact, it was the same as cleaning an artichoke, peeling away leaves and unformed proto-bananas or bracts until one reaches the soft pale center, the "heart" of the banana.
Once your banana flower is peeled, cut off the tip and then the stem. Cut the heart in quarters and place it into a bowl of water with 1 tsp of salt and the juice of half a lemon. This will keep it from turning an unattractive color. It's similar to what's done with fresh artichoke. Set the banana flower and water aside to sit for about an hour.
I next thought about what chicken recipe would work with my Banana flower. I decided that a version of a Sri Lankan chicken in coconut milk from Mangoes And Curry Leaves would do beautifully.