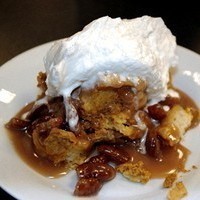 by Drick Perry
Publisher of: dricksramblingcafe.blogspot.com

The secret's in the sauce...

Like so many of my favored recipes, this one originates from the humbled working class and makes use of scraps or stale bits of bread, a few by-products from perhaps the wealthier kitchens. Known as the poor man's pudding, this became a very special treat by simply adding a little fat, milk, sweetener along with fruit or nuts to the stale bread bits. In earlier times, the pudding mixture was housed in a sop, a hollowed out loaf of bread as a way to contain it. Today, we enjoy making this dessert in large baking dishes, even single serving ramekins and we are fortunate in being able to afford the luxuries of adding desirable ingredients. I have many times come across recipes for bread pudding with just about every baking ingredient imaginable and I must say, I always favor the ones with true southern characteristics; but I bet that surprises no one.

This recipe is from Cortlandt Inge, local chef and wonderful neighbor just down the street. Cortlandt has a long background of preparing for many fine restaurants in cities of NYC, Washington, Chicago, Seattle before finally returning home to jump start many here and we are glad to have him in Mobile. Inge's whiskey

sauce is what gives this bread pudding its deep, rich color.

First, if adding raisins, put raisins into a small bowl, cover with whiskey and let set for several hours. Strain raisins reserving the whiskey for the sauce. Measure the whiskey and add to make the 1/4 cup needed.

For the whiskey sauce: Put butter and sugar in a medium,

until butter melts, then stop stirring and continue cooking until syrup reaches

280° F on a candy thermometer, about 10 minutes. Remove pan from heat, stir in

cream, whiskey, cashews, pecans, and vanilla, then set aside.

For the pudding: Preheat oven to 350° F. Butter a medium

and salt in a bowl. Soak bread slices in milk mixture, toss in raisins, then fit snugly in a

single layer in prepared dish (you may have to squeeze slices together). Pour

any remaining milk mixture over bread. Spoon two-thirds of the whiskey sauce

over bread and bake until crusty and brown, 45–50 minutes.

For the whipped cream topping: Beat together heavy cream, sugar,

whiskey, and vanilla in a bowl until soft peaks form. Serve bread pudding with